Open data, supportive legislation and the agile mindset of the people behind the innovation hotspots create modern day solutions to traditional challenges.

Carrying out smart mobility pilots in Helsinki is easy.

They say that we are innovative and forward thinking. We are after all pioneers in creating new business around smart mobility.

But we think that our success is also based on our political, economic, social, technical, environmental, legal and (!) regulatory environment that enables testing and developing of cutting-edge technology and services.

The City of Helsinki’s goal is to develop their entire city into a platform for testing and enabling innovative business solutions. Jätkäsaari Mobility Lab addresses this in the smart mobility theme. You can find out more about other themes (such as EdTech, Built Environment and Health & Wellbeing) at testbed.helsinki website.

Helsinki, and Finland in general, are known for competences and development activities related to automation. KMPG, for example, ranked Finland at 6th place on their Autonomous Readiness Vehicle Index in 2019, especially excelling as the best in terms of regulations supporting of AV use, efficiency of legal system and the availability of latest technologies. Not to mention second highest number of AV tech firm headquaters per capita.

“Finland has a positive legal and regulatory environment. The traffic safety authority is quite permissive, granting permits for trials to anyone who is interested in experimenting with Avs. The entire road network is available for experimentation.” -Henry Beniard, Global Strategy Group, KPMG in Finland. [2019 AutonomousVehicles Readiness Index, KMPG 2019]

The figure below illustrates a timeline of automated driving pilots in Helsinki (with Forum Virium Helsinki, the city’s innovation company, as a partner). 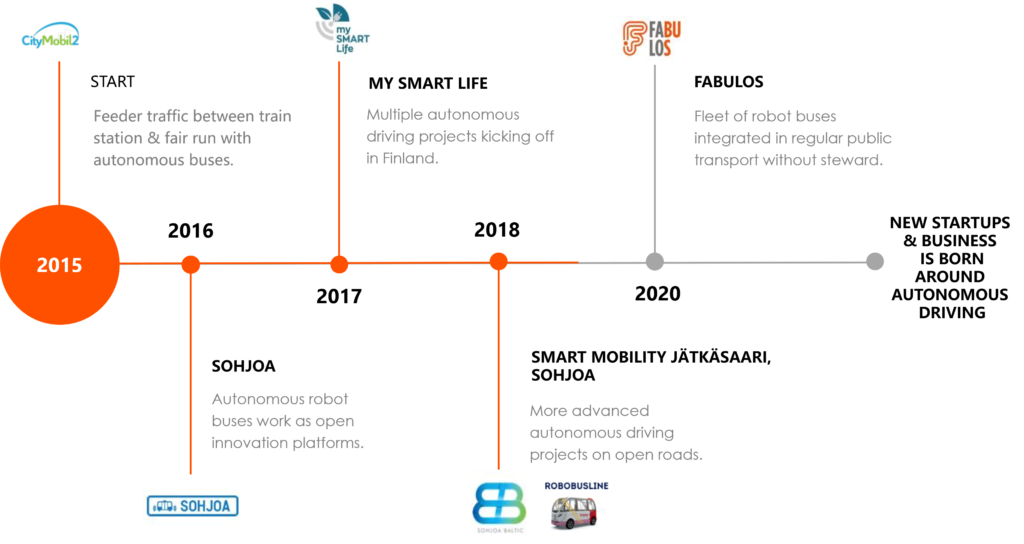 City of Helsinki and other public sector actors are closely involved in facilitating and leading the development in this field of innovative piloting.

Helsinki and Finland is the home of MaaS – Mobility as a Service – that integrates various forms of transport services into a single mobility service accessible on demand, as described by the MaaS Alliance. The well-known Whim app by MaaS Global, for example, launched in Helsinki back in 2016, and has since spread to other countries.

The approach is to facilitate and encourage market driven services to flourish and create new innovations to address the needs of the users. The national Act on Transport Services that came into effect in 2018 mandates all transport service providers to provide not only data on their schedules, routes etc. but also to open their ticketing APIs for third parties. For more information, check e.g. information on submitting required information to the National Access Point.

The City of Helsinki does not develop or manage its own MaaS service.

HSL, the Helsinki Region Transport authority, had a smart, demand-responsive pilot Kutsuplus already in 2012-2015. In 2019, there have been different on-demand pilots developed in Helsinki region by e.g. Kyyti Group and ViaVan (in collaboration with HSL). Some directed at the general public for providing first/last mile connections to metro stations, some dedicated to providing school children with after-school transportation to hobbies (instead of parents driving them around later in the evening).

The Act on Transport Services that came into effect in 2018 changed the landscape in Finland for taxis and ride-hailing services. For example, it removed the cap on taxi permits, price ceilings as well as location and time based requirements on taxi availability. Since then, the number of taxis increased, especially in the capital region (see e.g. Traficom’s news article). Now, in 2020, the effects of the changes are being assessed to determine if and how it needs revising.

According to a study done in 2019, the city bikes in Helsinki are the most popular ones in the world. The study compared 50 cities from around the world. [See the result presentation here, in Finnish]

HKL and Espoo City Technical and Environment Services run the system in Helsinki and Espoo, respectively. The costs are covered by advertisement, sponsorship and usage fees. The current service is contracted until 2026.

Statistics for 2018 for example:

More info on the city bike scheme is available at https://kaupunkipyorat.hsl.fi/en/helsinki/about. And here you can read more about other bike services offered by Helsinki City Transport (HKL).

In 2019, there were six e-scooter companies operating in Helsinki, and new ones are also welcome. The companies, local and international, serviced a total of 1,8 million trips during the year.

In 2021, the most prominent e-scooter companies in Helsinki were (in alphabetical order) Dott, Lime, Tier and Voi.

While the city does not specific enforced regulations for micromobility services like e-scooters (they are regulated on a national level, see Traficom’s info on electronic personal transportation devices, and essentially follow the same rules as bikes), the city has dialogue with the operators and has in collaboration defined guidelines and best practices to follow. These include, for example, practices regarding managing customer feedback, organizing removal of the devices when necessary, user instructions and communications, data and geo-fencing capabilities.

Similarly, winter-specific practices and limitations have been agreed with the operators, such as:

Also the amount of e-scooters and the operational zones is reduced during winter.

•   E-scooters are not allowed on sidewalks

•   Use of helmet is recommended by the Finnish Police

•   Scootering while intoxicated is illegal

Note: the guidelines above are examples of what have been agreed, not necessarily up-to-date e.g. with regards to speed limits or operating times.

Helsinki and Finland have a long tradition in openness and transparency of data and APIs.

The Helsinki region journey planner launched its open interfaces for developers in 2009 and as an open source code version in 2017 (https://digitransit.fi/en/). In 2019, Digitransit is used in several Finnish cities and is also exported to Estonia.

Data ranging from national road and traffic data (Digiroad, Digitraffic) to detailed city-level data and 3D city models is already openly available for analysis and further use. One of the largest local initiatives for opening of public data has been Helsinki Region Infoshare (HRI). HRI catalogues hundreds of datasets and APIs produced and available in the region: www.hri.fi.

The legislative Act on Transport Services aims to facilitate and ensure availability of services through e.g. requirements on the openness of information and ticketing APIs (see Regulation section below). The national open transport service catalogue NAP – national access point – is available at www.finap.fi

For more info on data available in Jätkäsaari, Helsinki and Finland, click here. 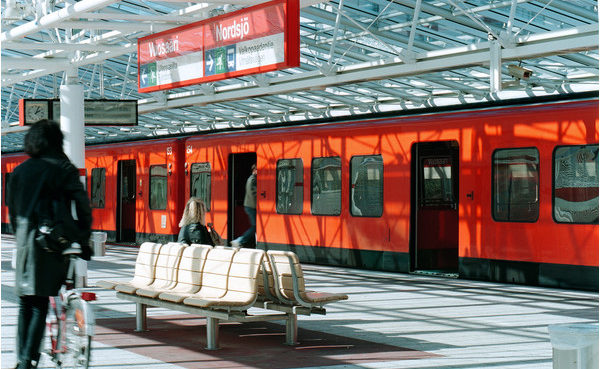 HSL is responsible for the preparation of the Helsinki Region Transport System plan as for planning and organizing public transport services, including ticket sales and pricing. HSL procures the regional bus, tram, Metro, ferry and commuter train services. More than 1 million daily journeys are travelled by HSL services, accounting for around 60% of all public transport trips in Finland.

HSL has set ambitious targets for emissions reduction (90% reduction of CO2 by 2025 from 2010 levels). By 2025, 30 % of the buses will be running on electricity generated in a sustainable manner in the Nordics (e.g. wind, hydro or solar). HSL also allocates bonuses to operators for emission-reducing actions. See e.g. this presentation for more info in Finnish.

HKL – Helsinki City Transport is responsible for operating the trams and the metro as well as for the construction and maintenance of tracks, stations and depots.

AALTO University is a multidisciplinary university specialising in art, technology and business.

UNIVERSITY OF HELSINKI is Finland’s largest and oldest academic institution. Today, this multidisciplinary academic community solves problems that concern all of us, also on the global scale.

METROPOLIA University of Applied Sciences Finland’s largest university of applied sciences, educates the professionals of tomorrow in the fields of Business, Culture, Health care and Social services, and Technology.

Finnish Center for Artificial Intelligence (FCAI) is a community of experts that brings together top talents in academia, industry and the public sector to solve real-life problems using both existing and novel AI. 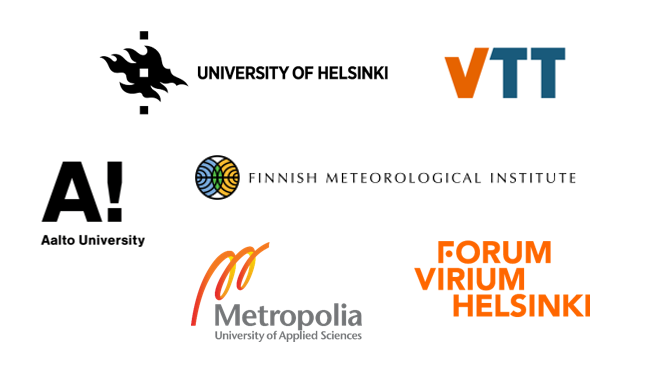 BUSINESS FINLAND is the Finnish government organization for innovation funding and trade, travel and investment promotion.

NewCo Helsinki provides both business advisory supports and coaching for small companies as well as startup services for foreign entrepreneurs in Helsinki.

Helsinki-based startups can apply for travel grants to support their international expansion.

Close involvement of authorities and other key stakeholders makes it easier to solve things as they come up – Agile approach with e.g. drones and automation helps a great deal.

Enabling approach to legislation: solving problems and breaking down obstacles for new ways of doing things

Strong and close cooperation between government, cities, companies and the research community

Brief introduction to Act on Transport Services on the Ministry of Transport and Communication’s press release 28.3.2019.

The ABC for flying drones

Report on ITS standardization activities in Finland (YTL, ITS Finland, ITS Factory & Infotripla 2020)

Here are some reports, development plans and strategies related to transport and smart mobility. 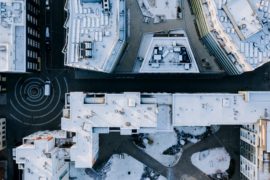 The project, LiiDi2, aims to create new business opportunities with mobility digital twins and models for collecting and utilising data.

The project includes data collection pilots and the development of innovative data acquisition models especially in the context of Stara, the Helsinki City Construction Services and their operations. 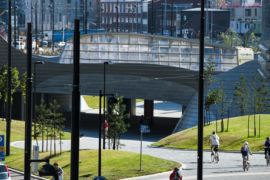 The AutoMod project (Autonomous Modular Solutions) is about creating a new kind of business ecosystem around moving platforms transporting service robots around the city to perform tasks related to e.g. circular economy.

Goal: Examining the use of an autonomous modular platform for different robots

The project will examine the operation of a transportation platform and what types of robots it could serve. The platform will host different modules – service robots – that can perform different tasks. Modules with various functionalities can be developed and attached to the platform by different companies. Most promising solutions will be piloted in the project. 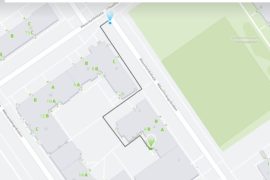 The project’s objective is to create an operating model for companies to convey last mile delivery information and details to drivers as open data. It will promote the operating conditions and improve cost efficiency of logistics operations, improve the service levels for the customers and reduce the environmental effects through optimization (e.g. reduced time spent looking for parking spots). 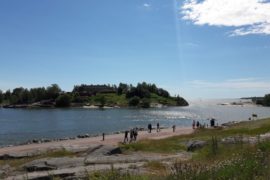 MaaS for the waterways (Vesiliikenteen MaaS)

The project aimed to improve the digital readiness and capabilities of maritime service providers (e.g. boat and ferry services) for improving business through modern ticketing solutions and shared data.

The project addresses the City of Helsinki’s maritime strategy in making the archipelago more accessible through digitalization as well as helps in developing APIs and platforms supporting business ecosystems.

AI4Cities is a European Pre-Commercial Procurement project for AI solutions utilising data to support climate action commitments. It is focused on energy and mobility.

The project does open market consultation to find and then procure AI pilots addressing the energy and mobility related needs of cities.  Request for tenders was published at the end of 2020.

Manage Cookie Consent
To provide the best experiences, we use technologies like cookies to store and/or access device information. Consenting to these technologies will allow us to process data such as browsing behavior or unique IDs on this site. Not consenting or withdrawing consent, may adversely affect certain features and functions.
Manage options Manage services Manage vendors Read more about these purposes
View preferences
{title} {title} {title}