Estonian-based Bercman Technologies ran an experiment of their Smart Pedestrian Crosswalk (SPC) solution in Jätkäsaari. SPC was one of the four agile pilots selected in the Open call of the Last Mile Project conducted in Jätkäsaari during 2019-2020.

A crosswalk in the Selkämerenkatu street was equipped with two traffic signs containing technology that produced data about traffic (i.e. traffic volumes, speeds, speeding violations) and the environment (i.e. temperature, moisture). The data was provided to traffic planners on a dashboard. The led-illuminated signs had warning functions for pedestrians. 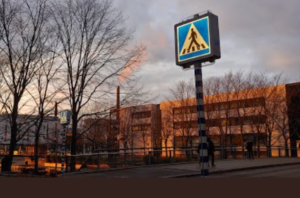 Piloting support and facilitation by the mobility lab

The Last Mile project and the Lab enabled the pilot and supported the experimentation throughout the process.

First, the lab helped plan and define the pilot. The lab contacted the traffic planners and the district development project of the City to define the goals for the experiment and to find the best location for the installation. The planners wanted to get data from Selkämerenkatu, a street where cyclists, pedestrians and car traffic cross paths. The availability of electricity for the location was checked with the city department managing street infrastructure.

The lab acquired permits required to run the experiment. A temporary permit for installation for the pilot period, traffic arrangements and roadworks was applied for with the built environment department of the city. The permit to use a red blinking warning light as a warning function was studied with the city, although that functionality was not used in the end.

The lab supported Bercman in the actual installation. An electricity connection was opened for the SPC. Available options for mobile data connections were studied. The actual installation with road and cable works was conducted by Stara, the in-house construction company of the city. Lab ordered the assignment from Stara.

The experiment was promoted in many ways. Forum Virium Helsinki’s communication channels included websites, social media, press releases, local resident networks and social media groups (with over 3000 members). The experiment gained visibility in Finnish major newspapers and in other media.

Communication with the residents was facilitated. Forum Virium Helsinki organised a demo day for residents and planners. The lab responded in residents’ questions and concerns in local social media groups, and forwarded residents’ feedback to the planners and the Bercman team.

In this case, the cost of installation was covered by the Last Mile project. Covering such costs is always pilot-specific and will be consulted with the Lab case-by-case.

“The first installation of Bercman’s Smart Pedestrian Crosswalk in real street environment was in Jätkäsaari. The Last Mile project and Jätkäsaari Mobility Lab helped us with the permits and coordinated the installation, including electricity connections and roadworks. We found the support to experimentation and contacts to the city very valuable.” -Mart Suurkask, Bercman Technologies

Manage Cookie Consent
To provide the best experiences, we use technologies like cookies to store and/or access device information. Consenting to these technologies will allow us to process data such as browsing behavior or unique IDs on this site. Not consenting or withdrawing consent, may adversely affect certain features and functions.
Manage options Manage services Manage vendors Read more about these purposes
View preferences
{title} {title} {title}